Our 8 Favourite Birdwatching Locations in Spain

Spain is one of the best birding countries in Europe and is adequately recognised for that. Two of its wealthiest regions are the neighbouring provinces of Extremadura and Andalucia. As Portuguese birdwatchers, we couldn’t be any luckier for having them right there after the border.

Of course, there is much more than that in this vast and biodiverse country. But, what we are about to share with you, is what we know the best and consider worth sharing.

Without following any specific order, we present our eight favourite birdwatching places in Spain. 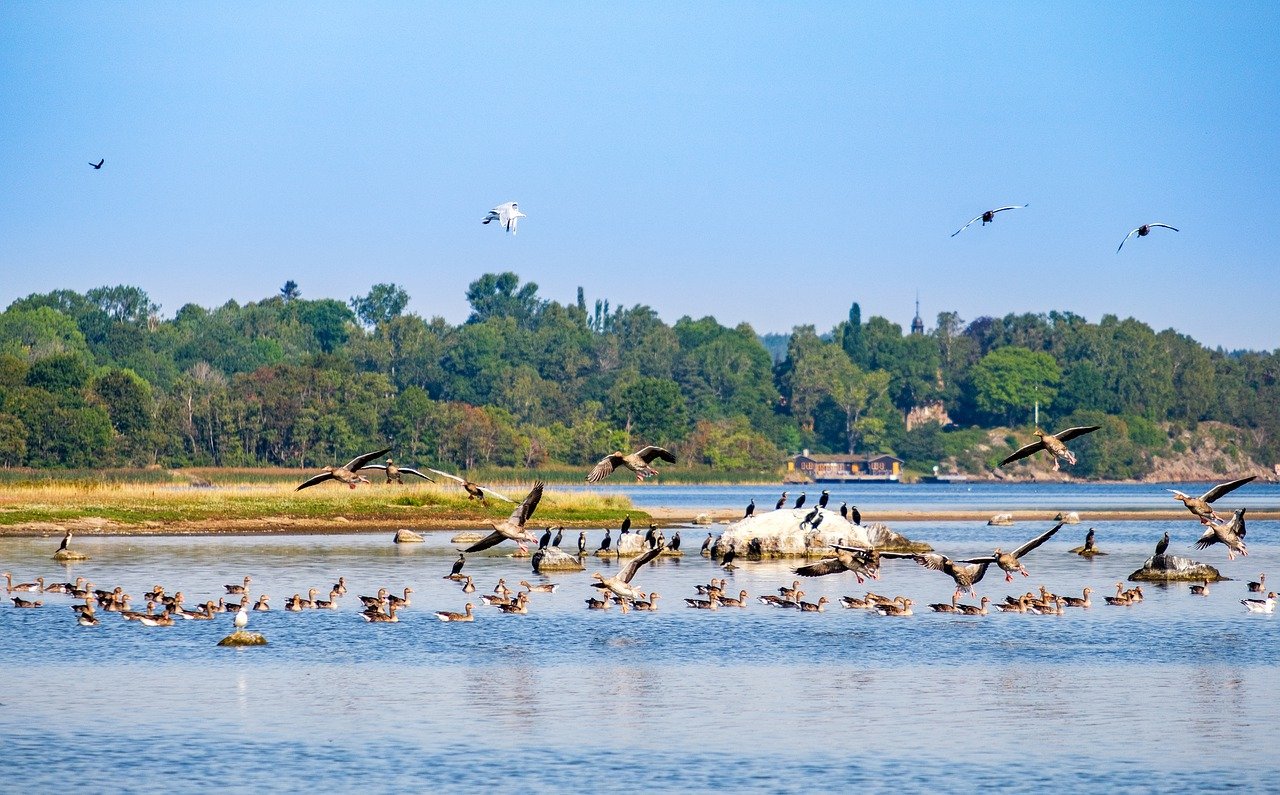 Greater Flamingo flock on the wetlands of Doñana National Park.

The first birding spot we what to share is the well-known Doñana National Park. It feels almost like cliché, but how not to share it?! This immense National Park with so many rich ecosystems for wildlife is a must-visit place in Spain.

From the wetlands with freshwater lagoons, reedbeds and mudflats, the pine woods, the rice fields and saltpans to the dunes and coastal area, there are just too many good places to choose from. One day will definitely be too short for everything.

Anyway, some of the places we advise a visit are the lake in Madre de las Marismas, El Rocio, the Natural Reserve of Dehesa de Abajo, José António Valverde Centre, Isla Mayor fields, and the Caño Guadiamar. 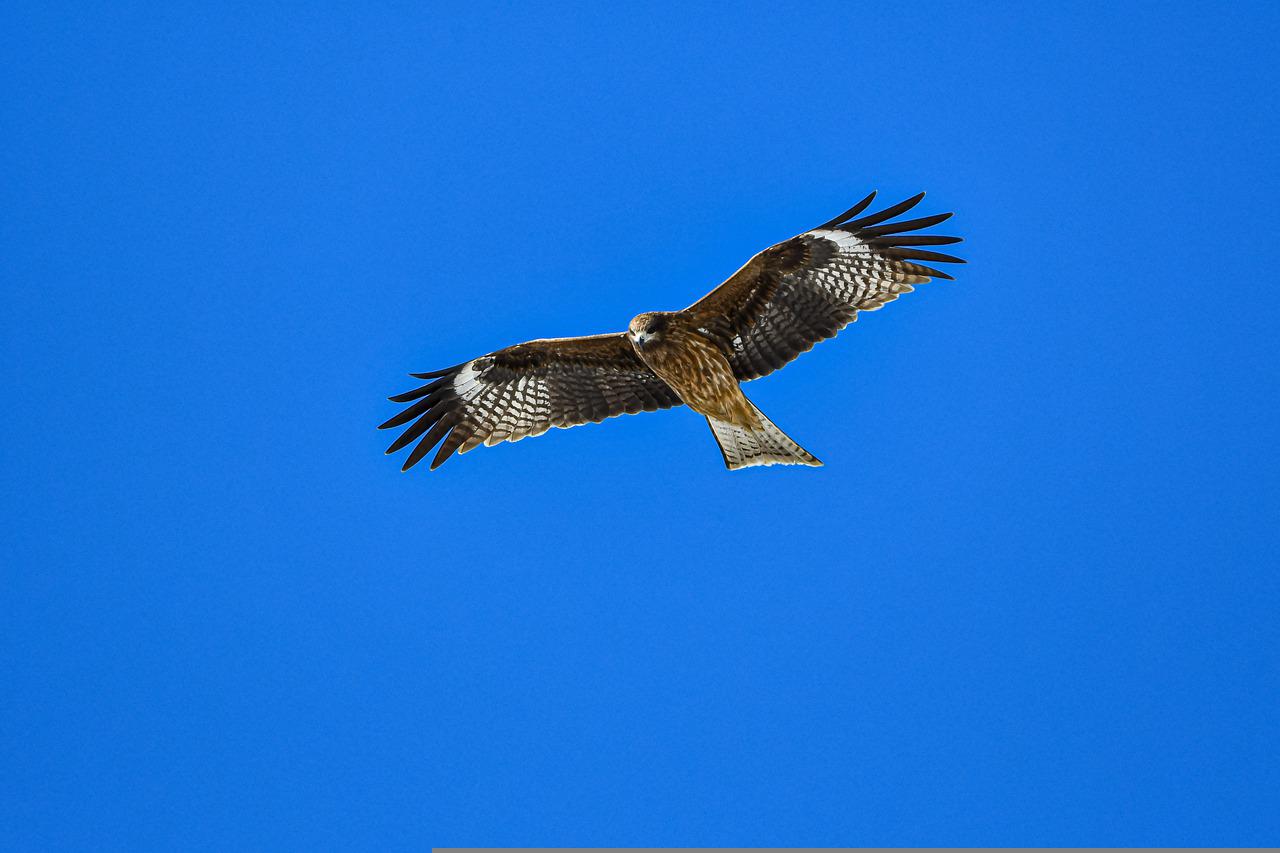 Black Kite is among the most numerous species passing by in Tarifa during migration.

The southernmost point of mainland Europe, Punta de Tarifa, in Cádiz province, is a famous key watchpoint for European raptors' migration. It is located in the Strait of Gibraltar, the shortest distance between mainland Europe and North Africa.

It is estimated that over 35 million birds cross this point every year. Some of the most common species are the White and Black Storks, the European Honey Buzzard, the Black Kite, the Egyptian and Griffon Vultures, and the Short-toed and Booted Eagles. But there are plenty more other small birds too. Don’t neglect them, as you may regret it.

Due to the strategic location, this place is better visited during Spring and, especially, Autumn migration. Suite yourself to the most convenient period and plan your visit in advance as the area gets pretty crowded during these seasons. 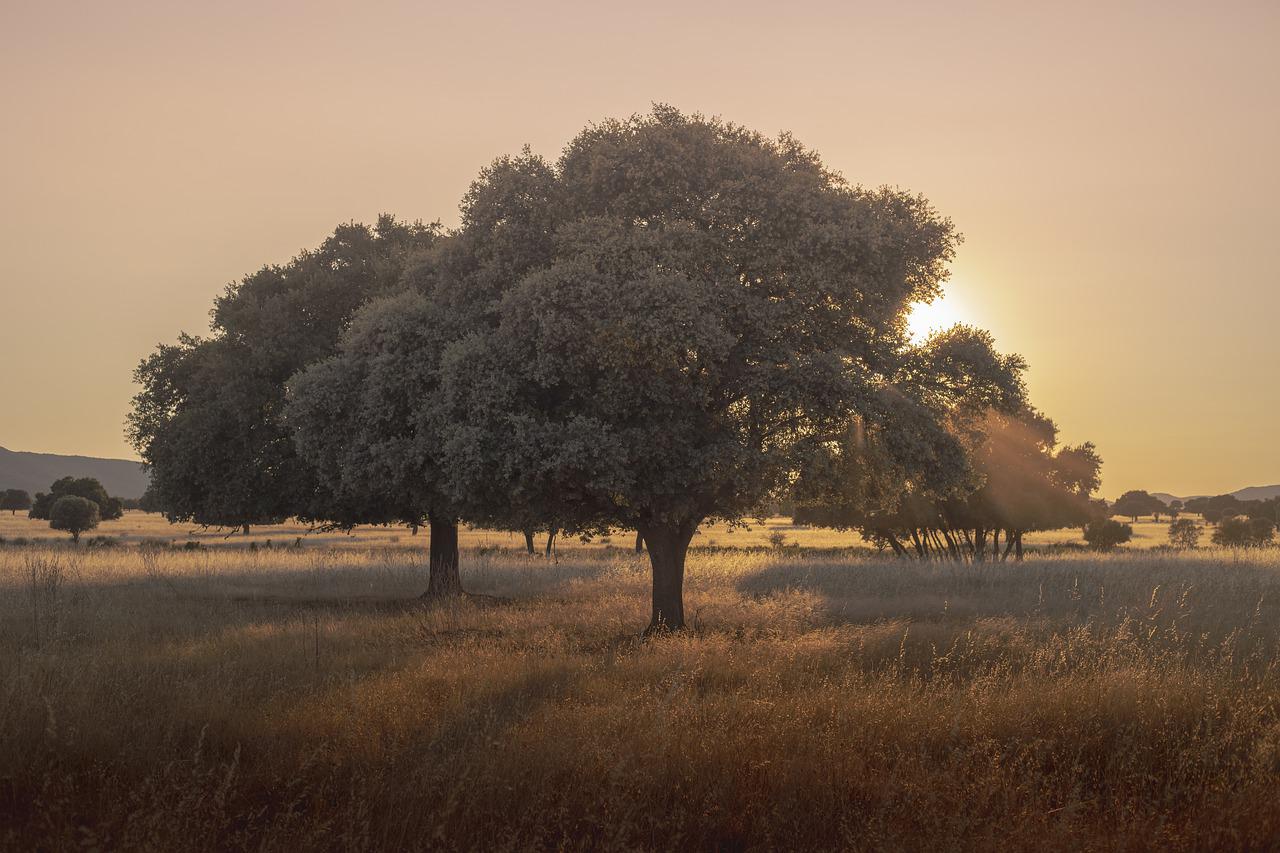 The vast wild, remote Cabañeros National Park lies in the heart of Spain and is a superb natural beauty. It is one of the least populated areas in Western Europe. It holds one of the most important Cinereous Vulture populations and very healthy populations of other endangered bird species, such as the Spanish Eagle and the Great Bustard.

Driving the road between Retuerta del Bullaque and Horcajo de Los Montes, with stops along the way, will ensure pleasant views and incredible birding opportunities. The best time to visit will be winter, Spring and autumn. Also possible in the summer, but be careful with the extreme temperatures. 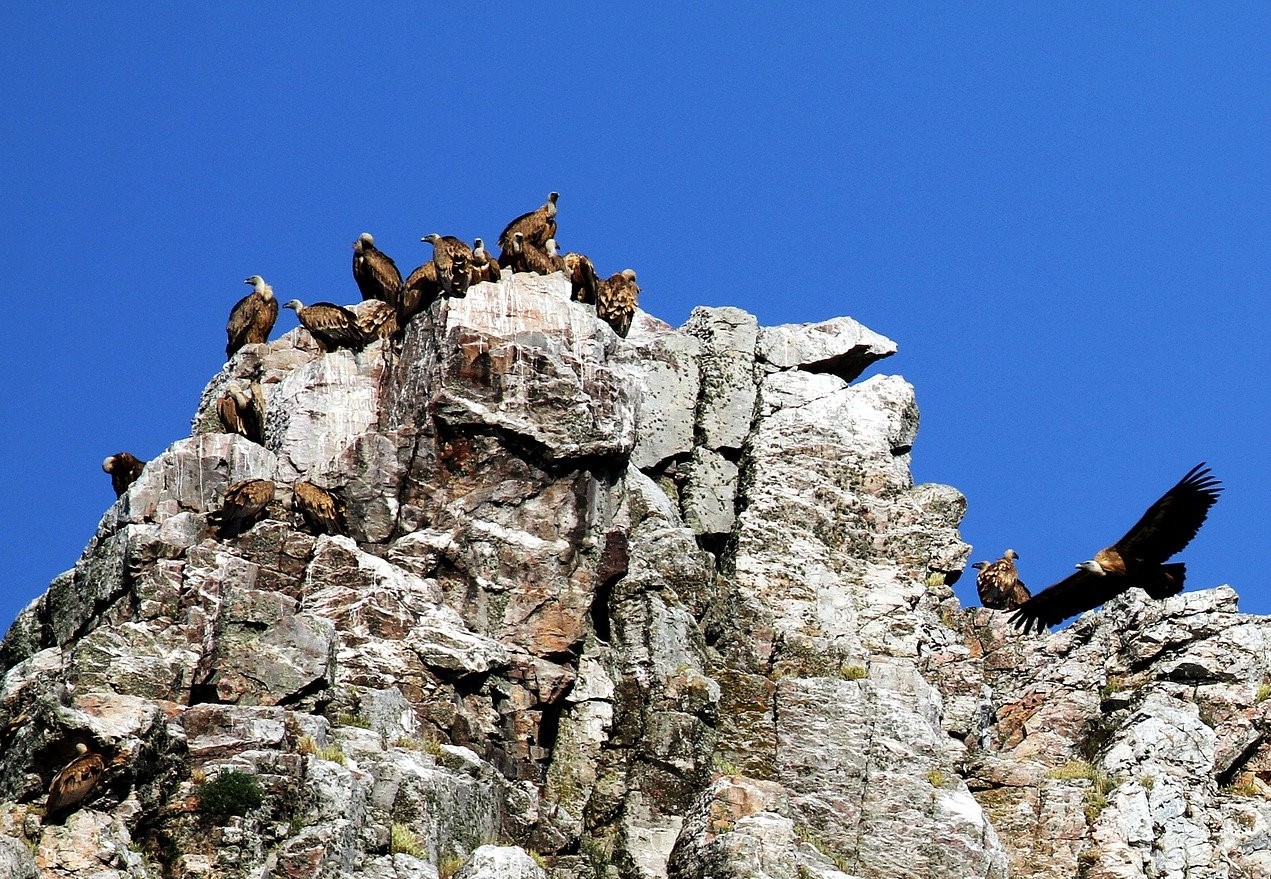 A flock of Vultures on top of a cliff in Monfragüe National Park.

Another special birdwatching place for us in Spain is the Monfragüe National Park. Maybe because it isn’t that far from Portugal or because it has beautiful cliffs and a paradise for vulture observation.

It is a symbolic bird location in Spain, marked by the huge rockface carved out by the river Tagus. It has several great observation places to have close views of species such as Cinereous, Griffon and Egyptian Vultures, Black Stork, Bonelli’s and Golden Eagles. But equally good for Eagle Owls and Wallcreepers.

There are several approaches in this National Park. However, we recommend a road trip on the northwest side with stops in the various viewpoints (mirador), finishing on Salto del Gitano. This is possibly the most “touristic” approach, but it is definitely the easiest and deserves a one-time opportunity. 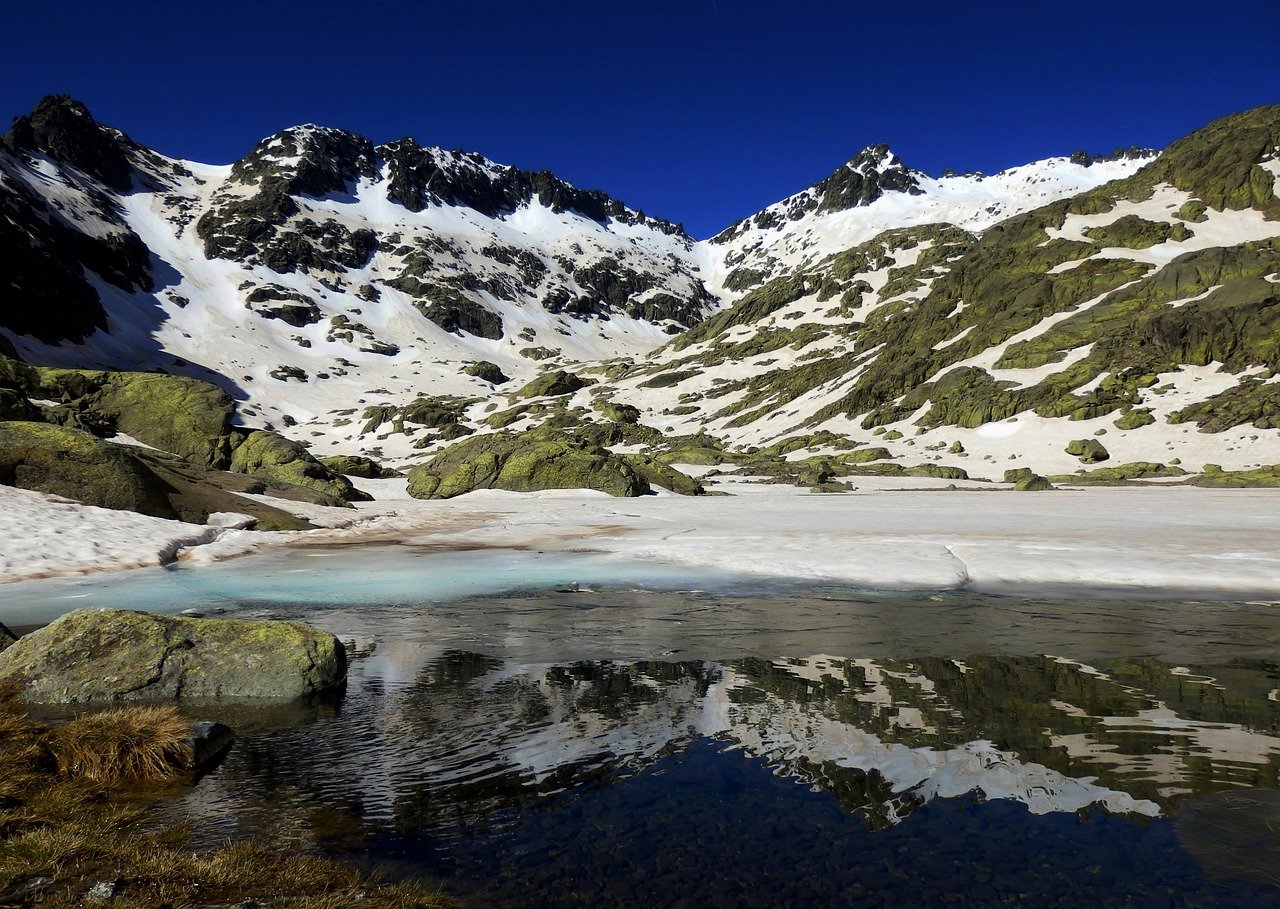 The Sierra de Gredos is a strictly alpine habitat with rock walls and alpine fields that provide the perfect habitat for unique species.

There are two places we suggest visiting in this mountainous protected area. One is the plateau of Gredos, which can get tricky to visit. There is a parking spot where you can leave the car and explore the area on foot. This is perfect for birdwatching and hiking.

The second option in Sierra de Gredos is the Puerto del Rico mountain pass on the east side of the mountain range, where it gets intercepted by the N-502 road. There you can either enjoy your birding from the viewpoint or walk on the path towards the mountain. Whichever option, we advise you to visit it during Spring or summer.

Some species you should be looking for are the Cinereous Vulture, Golden Eagle, Blue Rock Thrush, Common Rock Thrush, Alpine Accentor, Wallcreeper, Snow and Ortolan Bunting.

The Natural Park of the Sierra de Grazalema is located in the Andalucía province, somehow between Seville and Málaga. The whole area of the park is worth visiting both for birding and hiking reasons. Yet, the place we’d like to highlight is Llanos de Libar.

Llanos de Líbar is a forest track in a kind of plateau in the Natural Park of the Sierra de Grazalema that starts from the village of Montejaque. Through open pastures, oak woodlands, limestone areas and craggy cliffs, you can see remarkable views and several interesting bird species, among raptors and passerines.

In order to visit the place, you must follow an unpaved road on the southwest of Montejaque village and then return from the same way.

Some of the most wanted species there might be the Bonelli’s Eagle, the Black Wheatear, the Thekla's Lark, the Blue Rock and Common Rock Thrushes, the Rock Sparrow, the Western Orphean and Subalpine Warblers, and the Ring Ouzel. The last two are only there during winter. 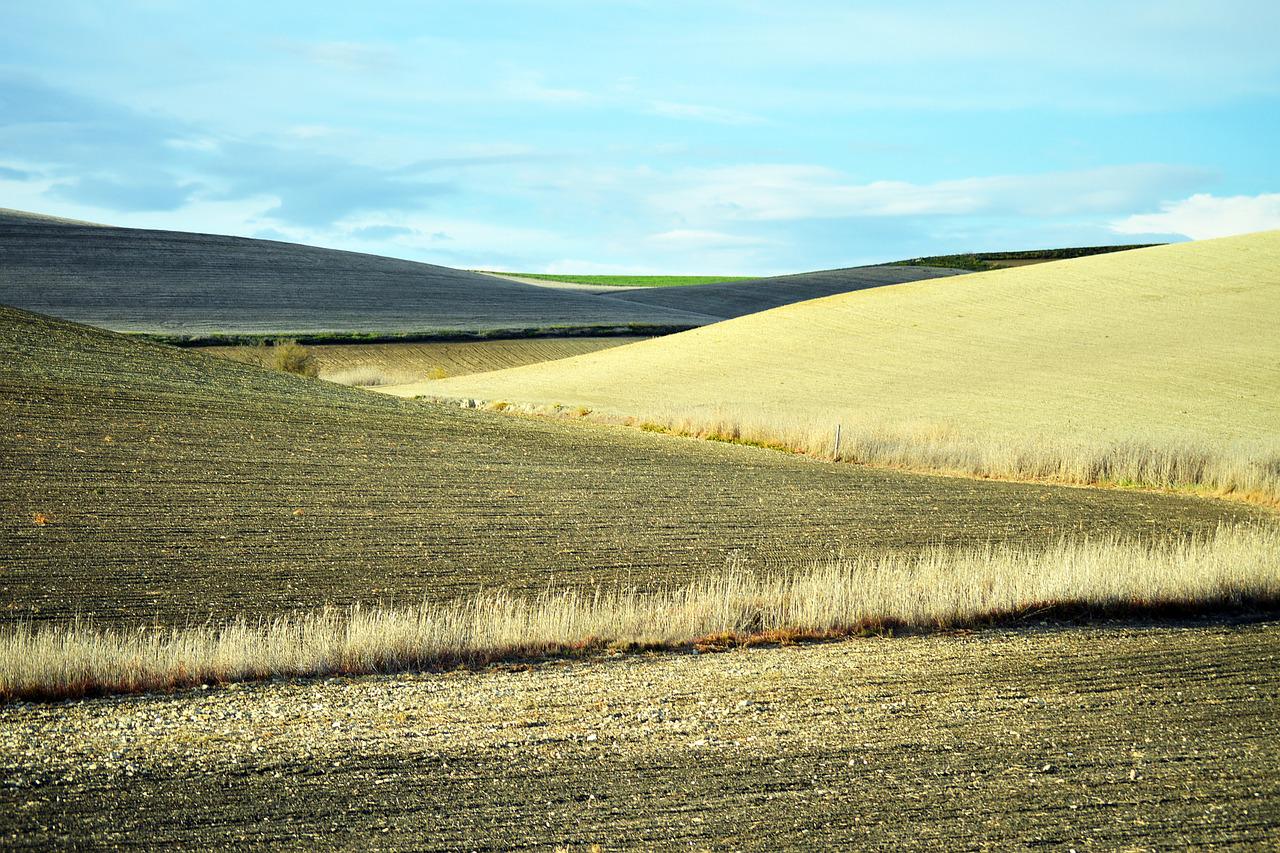 Agriculture fields like the ones that can be encountered near the village of Villarrobledo.

The ecosystem consists of plain agriculture fields, grassland, and scattered trees and bushes, which makes the area suitable for bustards and sandgrouses and attractive to several birds of prey.

It is good for birding all year round, though it might become unpleasant during summer due to high temperatures. Typically the south part of the village is better, but the north area can also be decent. 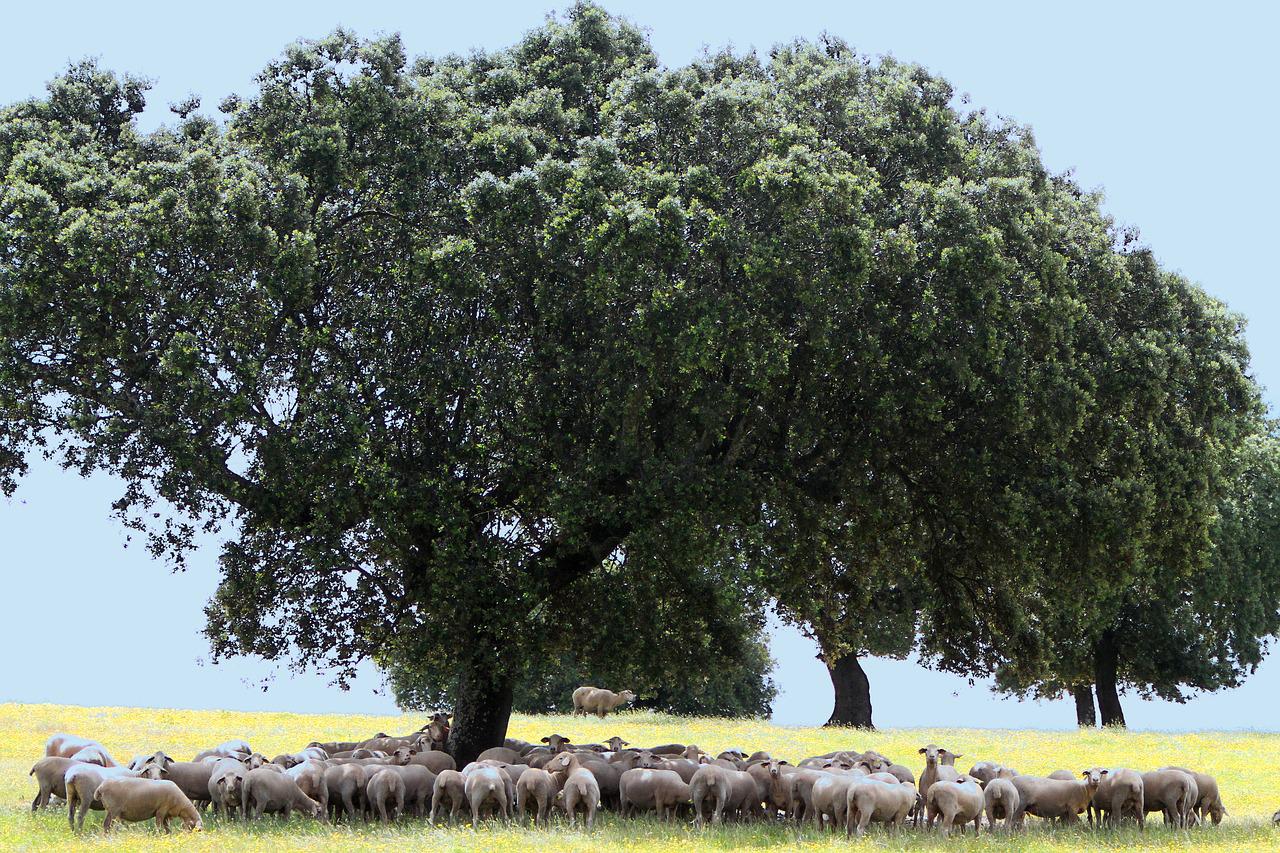 Typical views in the fields of Extremadura.

Region of Extremadura with several good birding spots, including the town of Mérida, the Alange Reservoir and the series of temporary ponds and lakes near the village of La Albuera. This birding area is outlined by Badajoz on the Northwest, Mérida on the Northeast and can go down to the town of Villafranca de Los Barros or even Zafra.

In a range of 120 km of open flat landscape, with lakes, temporary ponds and scattered trees, it is possible to see more than 150 species of birds from various groups. The area is easily reachable and to drive around and worth visiting all year round. Just remember that in the winter, the state of the tracks might be poor and affect your itinerary.

Those are our eight favourite birding places in Spain, mainly focusing on the country's western region, which, as we mentioned, is the area we know best.

Feel free to share your comments, doubts and favourite Spanish birding locations with us.