The September interview is about a birdlife conservation project - the  LIFE PanPuffinus - by the Portuguese Society for the Study of Birds (SPEA) to protect marine bird species. It is being implemented on the coastline of central Portugal, particularly in the Aveiro-Nazaré Special Protection Area. This project is co-funded by the European Union’s funding LIFE Programme.

What are the main goals of the LIFE PanPuffinus?

This LIFE Project, happening between the years 2020 and 2025, has the following objectives:

What are the main partners and stakeholders of the project?

The Project Coordinator is Birdlife Malta. The consortium of partners includes, apart from SPEA in Portugal, the Department of Fisheries and Aquaculture of Malta, the Hellenic Ornithological Society of Greece, the Ligue pour la Protection des Oiseaux of France, the Sociedad Española de Ornitología (SEO) of Spain, the Natural Environment and Climate Change Agency (NECCA) of Greece.

Fundraising and awareness campaign for the consequences of bycatch. SPEA. Photo from SPEA.

What are the species the project aims for? Are they endangered? Why?

The project aims to protect two species of shearwaters through a transboundary conservation effort. In Portugal, the target species is the Balearic Shearwater (Puffinus mauretanicus). It is the most endangered seabird species in Europe, and the Portuguese coast (mainly the Aveiro-Nazaré SPA) is the most important wintering area for this species worldwide.

As stated by SPEA, the population of Balearic Shearwater is relatively tiny (3200 breeding pairs and about 20 to 25 thousand individuals) and very localised since they only breed in the Balearic Islands.

In addition to natural factors, the main threats to this species are predators introduced into breeding colonies, such as cats and rodents, and accidental capture in fisheries, namely in gillnets, longlines and purse seines. If there are no conservation efforts to stabilise/increase its population, in about 60 years, the species could disappear.

The project’s consortium expects to indirectly benefit other marine bird species, such as the Common Scoter (Melanitta nigra), the Northern Gannet (Morus bassanus), the Common Murre (Uria aalge), and the Razorbill (Alca torda). They hope that by collecting information and characterising the problem of accidental captures, the knowledge about other species in the study area can be improved. 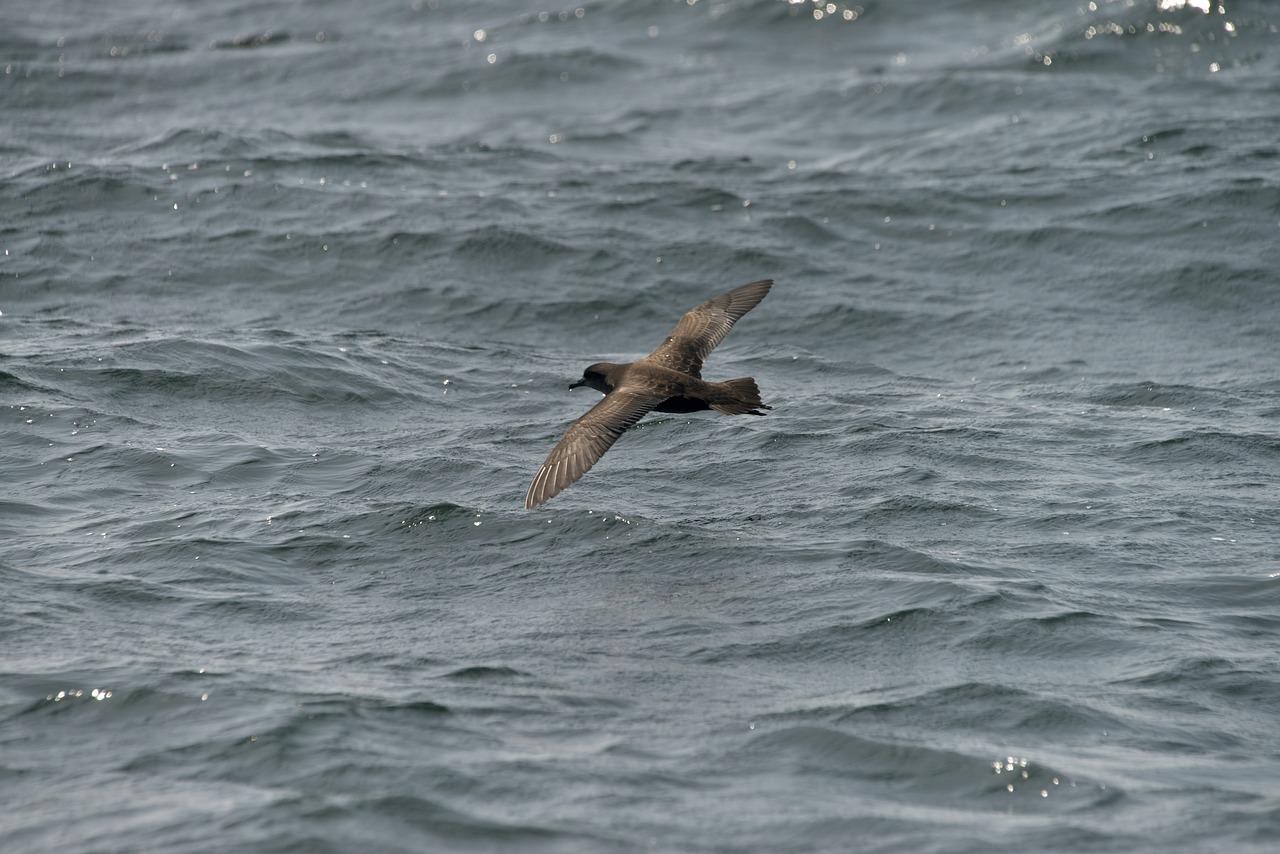 A shearwater (not the target species) in the group’s typical flight, “surfing” the waves above the water's surface. Photo from Pixabay.

What results has the project achieved so far in Portugal?

As reported by SPEA, they have carried out seabird censuses at sea, which allow us to estimate the number of shearwaters that occur within the SPA and to develop, together with the other partners, bycatch risk maps for both shearwaters.

Another aspect they have accomplished was understanding, through questionnaires to fishermen, which are the most affected bird species, the season that bycatch occurs more often and which type of technique and equipment is more harmful. Moreover, they have been keeping constant contact with fishermen to develop a trusty relationship and offer some training to fishermen so they can transfer their knowledge toward a better approach to fishing techniques.

Finally, the Portuguese team has developed inspections throughout the coast between Aveiro and Nazaré to monitor injured and dead birds brought to the shore and investigated possible causes of mortality. As stated in the interview, this is a task in which the voluntary participation of people is crucial.  So, if you are eager to give a hand and learn more about seabirds, check this link.

What actions are being taken to raise population awareness?

SPEA has developed numerous actions that include lectures/webinars on this topic, environmental education actions in schools in the project's areas of intervention and active communication with our partners/followers. In addition, during the fieldwork, which includes ship monitoring and surveys, fishermen are constantly made aware of the problem of bycatch and other current and priority topics such as garbage.

More recently, during June and July, a fundraising campaign (StopBycatch) was launched to boost the project further. The campaign managed to raise more than 9000 euros! 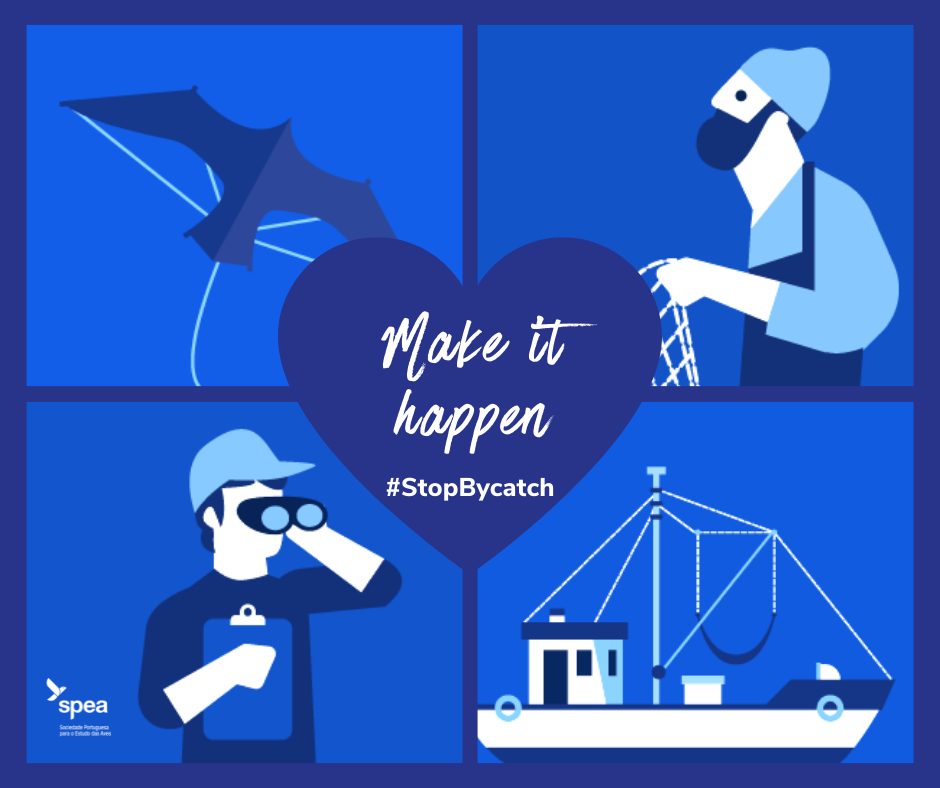 Illustrations for the fundraising and awareness campaign #StopBycatch, by SPEA.

How can people get involved and/or support?

Unfortunately, it is not possible to contribute to the fundraising anymore. Yet, there are other ways people can get involved. One is to participate in the project's activities or volunteer in the coastal inspections, for which SPEA is actually in need of some help in the areas of Nazaré and Figueira da Foz.

Another way to support SPEA work is to become a sponsor member, so they apply the fund to projects such as this one.

The project will continue in the following months with the development and testing of appropriate mitigation measures on the ships they work with and the training of fishermen in the identification of seabirds hoping they can support in reporting accidental captures.

You can learn more about this project, follow their work and get in touch with them through: