Diogo's work is primarily to promote nature conservation and biodiversity. To do this, he uses his photography work and social media platforms to promote knowledge about various wildlife species in Portugal. He is the founder and CEO of onWILD, through which, among many other things, Diogo delivers workshops, courses, expeditions and services of environmental assessments.

How did your interest in bird photography appear?

For Diogo, it all started around 10 years old, when we remember spending his days watching wildlife documentaries, sometimes whiles studying at home. Back then, social media didn’t exist yet, and information about wildlife was hard to be found on the internet. So, apart from those documentaries, Diogo relied on books to start learning more about animals and nature.

Soon he realised that he would like “to do the same and pass my days watching wildlife and trying to record everything”.

Another important factor that triggered his passion was his vacations with his mother. Always carrying her old camera, “she would take me to every corner of Portugal. So, I had the opportunity to travel to most of our nature reserves and natural parks.” 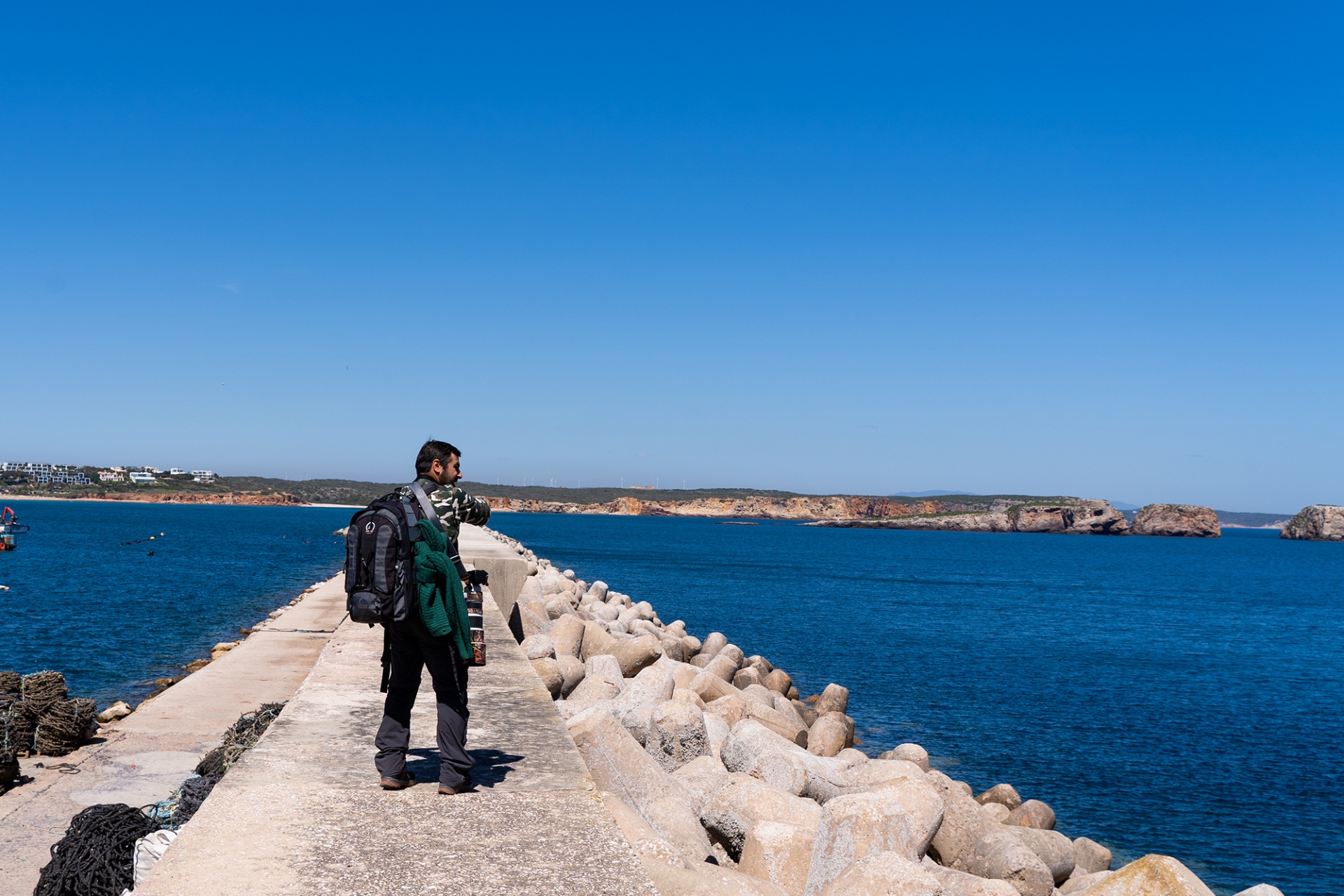 Tell us about your company/project. What is its mission, and what are its main goals?

“As a biologist and a wildlife photographer, I felt the need to create a project where I could combine both into one.” And that so onWILD was born. Among other things, Diogo shares wildlife photos, information about the species, and photography tips and techniques through this project.

Most recently, the project expanded to Youtube, where Diogo updates videos about the animals and where he explains how to photograph them. The quality and diversity of content are really impressive! Check it out here. 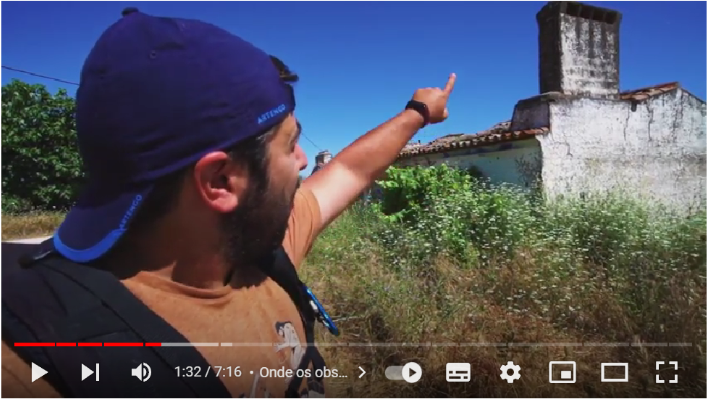 “One of my missions is to create awareness about our species, to share some conservation information about each one of them and try to do my part in their conservation.” He has recently started doing environmental education in schools, and his goal is to reach as many people as possible to raise conservation awareness.

Do you have any idea of how many hours you have ever spent outdoors taking photos of wildlife?

Wow! How impressive is that?!

To tell you the truth, now that we got to know Diogo and have seen him everywhere, we believe that could be even more!

What was so far your biggest challenge as a wildlife photographer? And which still is?

“Myths! Because they lack a science background.” Diogo believes that, as a biologist and wildlife photographer, that’s one of the biggest challenges. No matter how hard he tries to work on myths by informing people about the species in educational activities, they have those sayings and beliefs from generations that are difficult to break. One common example is snakes. People may never see one, but they would rather kill them without trying to understand its importance.

Diogo is always prevented. There is always all the equipment in his backpack for an unexpected encounter. So, it is normal for him to have his two Sony bodies, the Sony A7R III and the Sony A7R IV, and the Sony FE Macro 90mm lens in case a reptile or amphibian crosses his path. But, from all, the piece of gear he really loves is his Sony FE 200-600mm, as it allows him to photograph most of the birds.  “I can zoom in or out so I can photograph a bird or mammal that can show up close to me.” 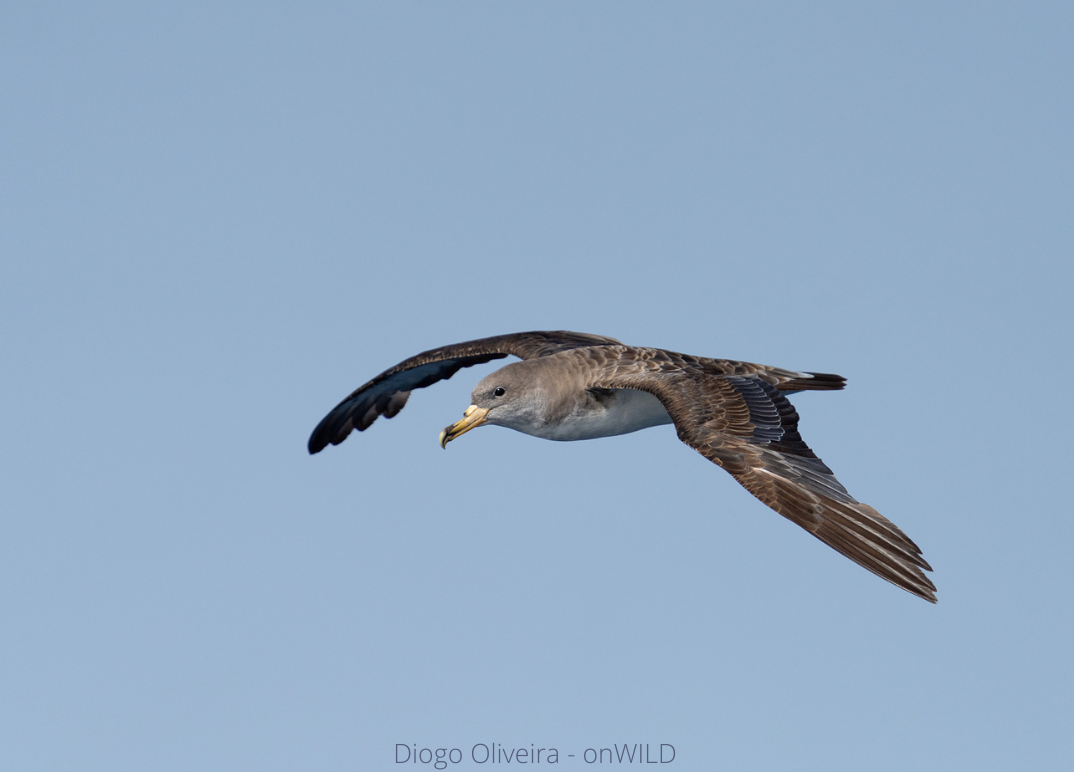 What’s your favourite location for photography and why?

“I really love the Alentejo Region, the contrast between winter and summer, between dry and wet, cold and hot. We can also find a lot of different species in this region. I explored Alentejo for the last few years, and now I have started to shift to the centre of Portugal, but it will still be in my heart, and I will visit from time to time.”

Over the last few years, do you feel that wildlife photography has changed?

In his opinion, Diogo has no doubts that it has changed, which is a good sign. According to him, nowadays, more and more photographers are out there, and more events are happening to promote wildlife photography, either talks, exhibitions, contests, or even social media content.

That’s a sign that wildlife photography is getting more people interested in wildlife. Let’s just all hope that for the right and respectful reasons.

What tips would you give to someone that is just starting to go out to photograph birds/wildlife?

Diogo’s tip is pretty straightforward. “Just go out and learn as much as possible about the species you would like to photograph. Some behaviours don’t come from writing in books, you have to be on the field to learn and be aware of them. “

But, he also advises people to seek events, such as workshops, festivals or talks, and attend them to meet and learn from other wildlife photographers or birdwatchers. 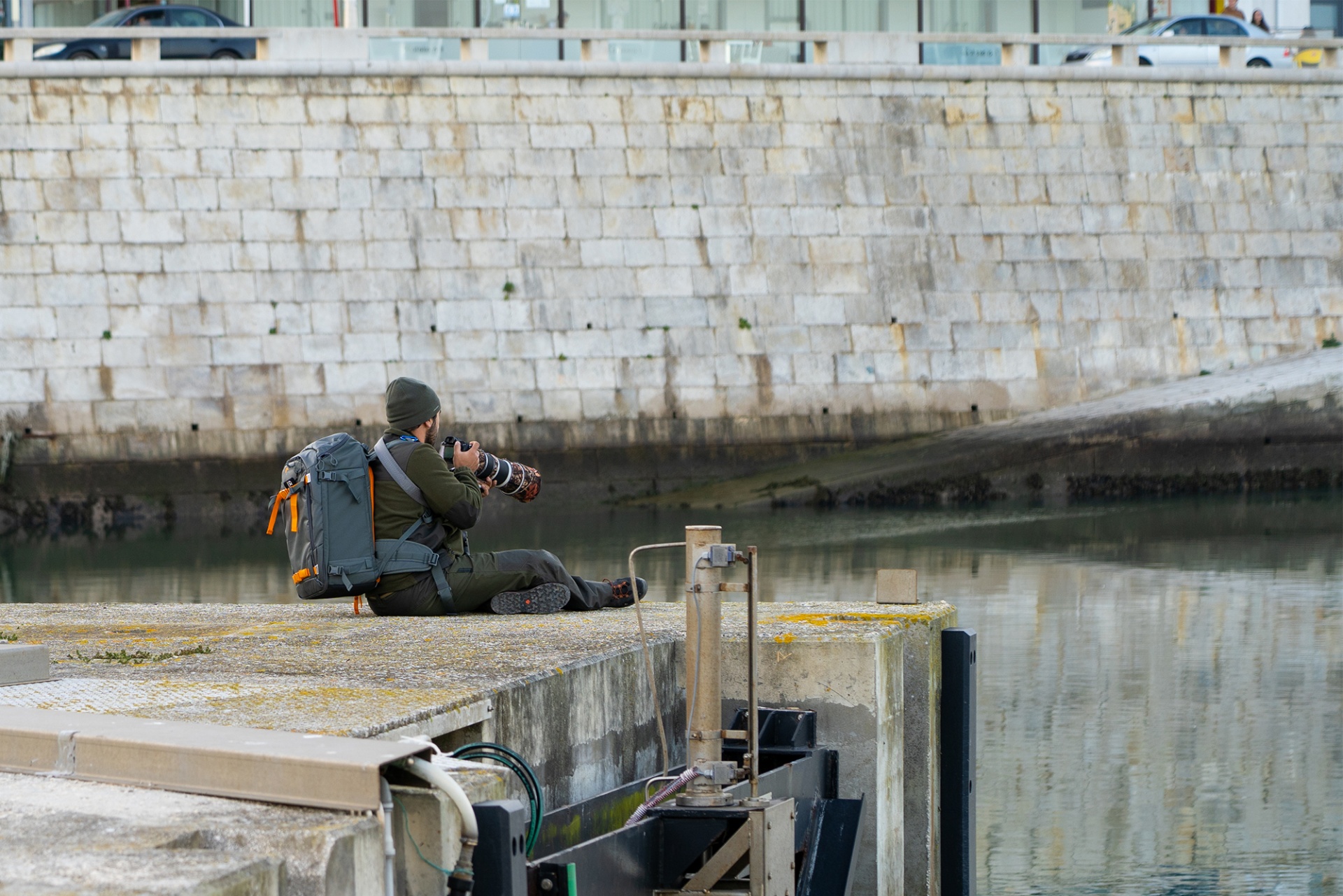 Diogo shooting at some aquatic birds in a harbour.

Could you tell us a memorable story you had while birdwatching/photography?

For someone that spends so many hours in the field, patiently waiting in his hide for some action, we believe there must be many memorable and unique unforgettable moments.

Diogo’s favourite was when he first tried his hidrohide - a hide to be used inside the water. Here is his story:

“I went to a small lagoon which I knew how the shores were because it had been dried the year before. I knew there were no deep zones or holes. I could walk along the shore without falling into a hole. So, I decided to test it there. I prepared everything and entered the water opposite where the birds were. This way, they could not see me enter the water. I was literally testing the waters, trying to find what works and how I should move in the hide when I should take the photos, and how noisy I could be without disturbing the birds. One time I stopped to check where the great crested grebe, and I spotted them before entering the water. And suddenly, I had a common coot passing right in front of the camera. I thought that was my lucky shot. I reached the end of the lake, so I had to return to where I had entered. I was halfway through when I spotted what I thought to be a little grebe with branches on its beak to create a nest. I followed its direction, and when it reached the shore, it was, in fact, a European otter! It had caught a Louisiana crawfish (an exotic species) and was eating it on the shore. I had to move carefully while taking photos. Then, the wind changed direction. The otter captured my smell and simply left the scene, never to be seen again. I will never forget how lucky I was.” 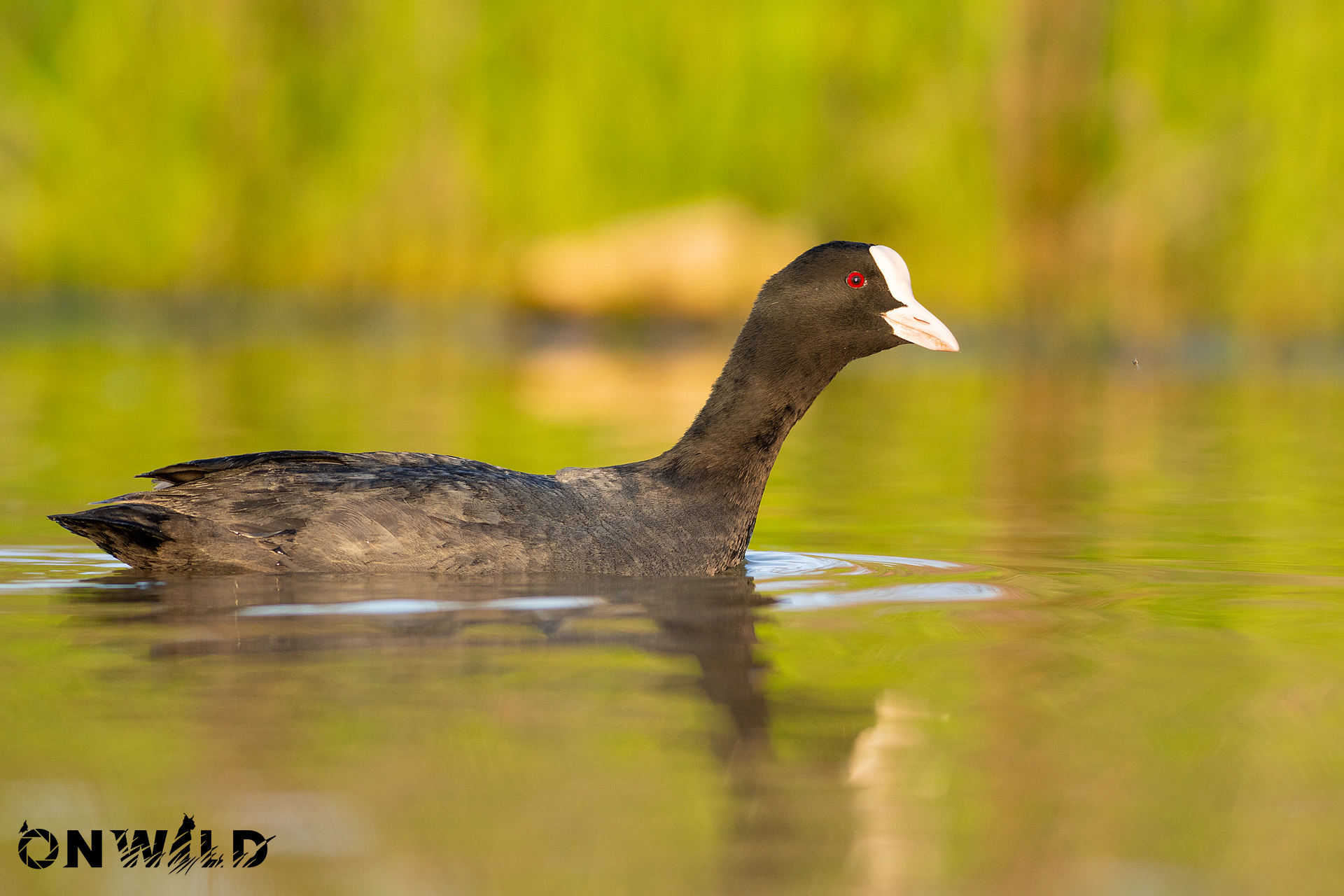 As a final comment, Diogo left us with this sentence, which we couldn’t agree more with!

“Wildlife photography is an amazing form of art, but also a way to make conservation. Our photos can reach every corner of the world, create awareness about different species, and help raise efforts for species conservation. Our main goal should be to help the species, we should work for conservation and not work for likes or comments.”

You can learn more about Diogo Oliveira´s work and get in touch with him through:

Hope you enjoyed reading about this enthusiastic and proactive photographer as much as we enjoyed talking with him. We encourage you to dig into his work in the links we left above. Trust us, you won’t regret it. And pretty sure you will learn lots of new things about wildlife.